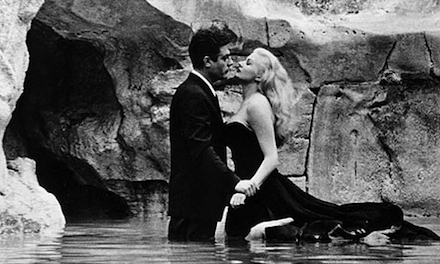 Journalist and man-about-town Marcello has set aside his literary ambitions to become a gossip columnist, who spends his days going to parties and sleeping with socialites in order to get his sensationalist stories.

Federico Fellini’s groundbreaking film was hailed by critics around the world but condemned by the Vatican for its treatment of sexual themes, and its alleged blasphemy. La Dolce Vita is masterfully constructed and marks the transition between Fellini’s neo-realist and his later art films. Featuring a score by Nino Rota, this fascinating, stimulating and provocative film put Italian cinema on the map, in a time where the country was emerging from fascism, World War II and post war poverty.

Please note that Firth Hall will be used as an alternative venue if weather conditions prevent this from taking place outside.

Presented in partnership with The University of Sheffield Concert Series.