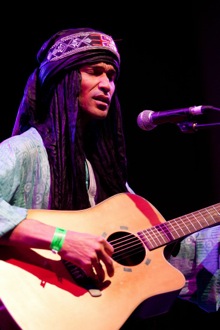 An informal gathering with filmmaker Akli Sh’kka presenting his debut short film, Imshradj. Largely shot illegally in Libya, the film provides a glimpse of the tough nomadic life and threat to the future culture and language of the Amizigh (Tuareg) people in the Sahara. The film will be followed by a talk with the filmmaker and a live music set by Danto Aiyya and his Acacus Band.

In association with Translating Performance, an AHRC funded project based at the University of Sheffield. Researchers will be present at these events, looking at the role of performer and audience. To find out more and contribute your own videos, impressions and images visit www.translatingperformance.org.