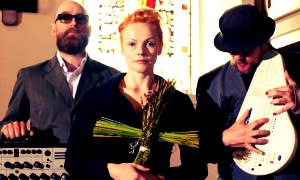 perform 1612 Underture in a Spiegeltent

The Eccentronic Research Council ft Maxine Peake’ are set to perform their critically acclaimed debut lp ’1612 Underture’ in the unique setting of a 1920′s Spiegeltent as part of Festival of The Mind.

‘The Eccentronic Research Council’ is the brand new spooky electronic collective put together by Sheffield based/Salford born Adrian Flanagan (Kings Have Long Arms/Chanteuse & The Crippled Claw) and Sheffield’s own Dean Honer (I Monster/All Seeing I, producer of Human League) that features the Boltonian tones of Bafta Nominated actress Maxine Peake. Maxine has graced our TV & cinema screens playing diverse lead rolls in everything from Silk, Shameless, Room at the Top, Hancock & Joan through to Dinnerladies, to name but a few.

1612 Underture is described by the Guardian as “a bleeping, buzzing, whirring krautrock tribute to the Pendle witches.” The Pendle Witches were a group of men and women who were rounded up in the villages surrounding Newchurch (Lancashire) and tried for witchcraft in 1612. Nine of them were hung for the crime almost exactly 400 years ago.

The event is part of music, film and digital festival Sensoria and the University of Sheffield’s Festival of the Mind.

“This album is more than an excercise in Northern esoterica-it’s charged politically, sociologially and sexually. Pitch Perfect.”

“One of the most marvelous, bizarre and indisputably British pop records we’ve heard this year.”

The Quietus“I’m about to step in to something weird ere’ that sound’s like the past, the present and the future.”

plus support and DJ’s

Tickets are also available from the Harley and the Wick at Both Ends.

This entry was posted in News. Bookmark the permalink.